While certainly this train of events for is alarming for civil society, I would say that for Indigenous Peoples, it was even worse. The International Indigenous Peoples Forum on Climate Change (IIPFCC) is a long-existing platform open to all Indigenous Peoples and that serves as the IPO constituency at the UNFCCC and one that brings together IP organizations and networks from local to national, regional and international levels. Neither the IIPFCC or even indigenous organizations that are active at the IIPFCC had received any invitations, funded or otherwise by the Interim REDD+ Partnership to the meeting in Brazil. Certainly it represents a step backwards from the Government of Norway’s Climate and Forest Initiative (NCFI) meeting in May 2010, the precursor to this Initiative, where Indigenous Peoples were invited, though only as observers. 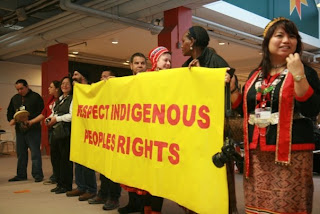 
All these leads to the worrying trend that, despite promising steps in the proposed international regulatory framework for REDD regarding the rights of Indigenous Peoples, there is little prioritization for putting the principle of full and effective participation into practice. The participation of Indigenous Peoples is a right internationally recognized in various conventions and international agreements to which all parties to the Partnership have signed on to.

Participation in the process is not equal agreeing to or endorsing the REDD+ Partnership, and in no way tantamount to the free, prior, informed consent of the rightsholders. However it is a necessary pre-condition to Indigenous Peoples being able to make a decision, without prejudice to the outcome of the decision. Furthermore, full and effective participation has to be facilitated and supported at all levels and it is not participation when decisions on when and who to participate are not made by Indigenous Peoples through our own processes but by other parties.

2, that this hasty process of implementation, without participation or even consultation, will bring about the result that the governments are trying to achieve i.e. real, meaningful reductions in emissions from deforestation and forest degradation.

Jen is a Dayak, from Sarawak and the Climate Change focal point for the Indigenous Peoples’ Network of Malaysia (JOAS)
Posted by Eleanor Goroh No comments:

This statement is made on behalf of Jaringan Orang Asal SeMalaysia, the national umbrella body of Indigenous Peoples Organizations in Malaysia.

Malaysia consists of three regions namely Peninsular Malaysia and the two Borneo states of Sabah and Sarawak. Indigenous Peoples of Malaysia is very diverse, consisting of over 80 groups of peoples with unique cultures, language and traditions that have co-existed in a pluralistic society for generations. Malaysia has a two-tier government, federal and state, and both have legislative powers. The federal government has jurisdiction over matters such as foreign affairs, defense/internal security, finance, communications, transportation and education. The individual states have control over their natural resources such as land, water, forest, agriculture and minerals, besides having their own constitutions and executive legislature.

Malaysia supported the adoption of the Unite Nations Declaration on the Rights of Indigenous Peoples (UNDRIP) both at the Human Rights Council and the General Assembly, however since the adoption of this declaration; there is still minimal progress in its implementation in the national and local level.

In Malaysia, there are numerous court cases that have been filed by our Indigenous Peoples’ communities for their Native Customary Rights (NCR) due to development aggression and large scale land grabbing on their territories. The UNDRIP have been used extensively by our lawyers in these court case litigations and this have resulted in several land mark judgments that have upheld our rights. But despite all this, we still find it difficult to get our government and its agencies to put any reference to UNDRIP in official documents or negotiations often using the excuse that the declaration is a non binding document. Let us remind our government that this document is already in the human rights charter and other international law which it has obligations to implement. The UNDRIP should be the minimum standard when it come to respecting the rights of indigenous peoples.

With this regards Mr. Chairman, ever since the adoption of the UNDRIP, we the indigenous peoples of Malaysia have been facing uphill task to promote and demand the implementation of the declaration in our country mainly due to the low awareness of our governments and communities with regards to the UNDRIP in our country.

We believe that the UNDRIP can be mainstreamed in our country through continuous active engagement with our governments. In this instance we have done a comparative policy study to examine the laws of our country to indentify the gaps that needs to be amended in line with the declaration. This comparative study will be submitted to our government for urgent action. We the indigenous peoples of Malaysia believe that the UNDRIP can provide a venue for pluralism to happen in our country.

We demand our government to adopt the UNDRIP as a law and provide a national platform that can ensure its full implementation in Malaysia. JOAS wish to extend its willingness and support to make this to happen.

• To establish and strengthen programs to promote the UNDRIP in the local, national and regional level.

• To urge governments to integrate the UNDRIP in national laws and policies.

• To establish a mechanism to monitor the implementation of the UNDRIP in the national and regional level.

Thank you Mr. Chairman for this opportunity to address this agenda item.

Indigenous youth and children globally represent some 50 to 70% of the total indigenous population. Despite this, we are often excluded and ignored from discussions where decisions affecting us are made. There is a desperate need to involve indigenous youth as stakeholders in decision-making processes on the national and international level as we as youth hold a key position between our indigenous tradition and modernized structures. We are carrying the great value of being familiar with both, thus play an integral part in the formation of indigenous identities and the continuation and sustainability of cultural practices and traditions. It is critical that we have full and effective participation in decision-making processes, so our voices can be heard, allowing us to identify our needs and act accordingly.

Echoing the study, we prepared a situation analysis on indigenous youth’s participation in decision-making process based on information and input provided by the members of the Global Indigenous Youth Caucus worldwide.

1. At the community level, format and degree of youth’s participation in decision-making vary. While some youth are intensively included in cross-generational connections and communications with their elders, others are not permitted to express their opinions with ultimate decision making lying with elders. Native models of congenial cross-generational communication should be put forward for consideration at the UN and in decision-making process on all levels.

3. Many governments claim that “youth are the best experts on young people’s lives”. However this does not carry over to policy that affects us; education, vocational training, cultural survival and environmental protection policies are often made by senior officers without any input from youth, or consultation with indigenous youth.

4. Indigenous youth participants can be spotted in many regional and international gatherings. However, may I ask everyone who is under age of 24 to raise your hand? (Thank you.) As can be seen here, it is obvious that the number of indigenous youth representatives present in international occasion is still low. Financial constraint is often but not the only issue. Members of the Youth Caucus have been denied entry to international conferences due to visa, accreditation, or political interference.

6. Other key obstacles that hinder youth’s participation include, cultural constraint, lack of access to adequate information, poor understanding of information, deprivation of our rights to learn about our rights and relevant international instruments. Our education does not adequately reflect our indigenous heritage and the specific needs and world view of indigenous youth. There is general exclusion from capacity-building processes and lack of motivation to participate.

First of all, I would like to congratulate you on behalf of Indigenous Peoples’ Network of Malaysia for your election as Chairperson of this session. We would like to also congratulate you and your fellow experts for compiling the draft report. We are very happy that our submission to the EMRIP has been incorporated in the document.

We, the Indigenous Peoples of Malaysia, have very distinct cultures and relations to our land, territories and resources. We strive to maintain these distinct values through our Adat and values that have been passed down to us from our ancestors for generations. We have lived and nurtured our traditional knowledge, innovations and practices since time immemorial, making us the true custodians of our land, territories and resources.

In Malaysia, we have very unique situation where customary law and its institutions in the state of Sabah and Sarawak are recognize by the federal and state constitutions. However, throughout the years we have seen the erosion of our customary institutions due to government appointments of our customary leaders, bypassing our traditional way of selecting our leaders. This has resulted in the weakening of our traditional leadership system which has undermined our effective participation in decision making. This is clearly a violation to our rights to self determination and self governance.

As a result of the weakening of our leadership system, development aggression has resulted in loss and misery of countless number of communities through logging, large scale plantations, mining, mega dams, protected areas and other infrastructures. These is a direct result in the lack of participation of the indigenous peoples in the decision making process. The government is been given inaccurate information about the real situation by the project proponents because the indigenous peoples is not involved in planning of such development. Local and international cooperation continues to disregard the need for Free Prior and Informed Consent (FPIC) before any development in our territories; they have no fear and pay little attention to our demand for dialogue as they see that they have full backing from the authorities.

With regards to the thematic study on the right to participate in decision making; we would like to stress that FPIC process is not a mere consultations process but a process to assert our rights to self determination. FPIC is not enough to protect our rights if the erosion and political intervention by the government that result in the weakening of our leadership which undermines our rights to participate in decision making process. The weakening of our traditional leadership has failed our communities since the government appointed leaders does not bring the aspirations of our communities. They had become mere eyes and mouth of the government in the system that is designed to be top down decision making process.

We have received numerous complaints from our Orang Asli brother and sisters that the Department of Aboriginal Affairs also continues to make decision on behalf of the Orang Asli without the full and effective participation. Dialogue are organized merely to get rubber stamping from the community even there were voices of protest, but these voices of protest is not taken into consideration.

But despite all these, we would like take note of the recent development. The formation of the Selangor Orang Asli Land Task Force which is to facilitate the process to indentify and demarcate the customary land of indigenous peoples in the state and an effort to solve age old issues. The action is done by the indigenous peoples themselves using participatory mapping with full participation of indigenous communities concerned. We hope that this good practice of using new tools and providing platform to the indigenous peoples’ community can also be replicated in other states all over Malaysia.

In conclusion, We wish to recommend the following;

1) EMRIP to study the impact of the state imposed committees to the traditional leadership and participation of Indigenous Peoples in decision making.

4) EMRIP to recommend to the Human Rights Council to organize a global round table discussion on FPIC.

Thank you Mr. Chairman
Posted by Eleanor Goroh No comments: