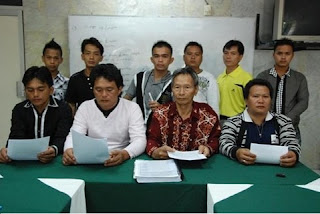 
Penan community wants to scrutinize the Social and Environmental Impact Assessment (SEIA) Report for Murum dam project prior to approval.

The Pelieran-Murum Penan Affairs Committee and the residents of the Penan villages affected by Murum Hydroelectric Dam project are urging the Sarawak State Government as not to make any approval to the “Social and Environmental Impact Assessment” until it has been scrutinised by themselves and the public.

Throughout last year (2009), we have been visited by various parties claimed to do some studies related with Murum dam project. We were told that the government has carried out the Social and Environmental Impact Assessment (SEIA) in order to study the impacts of the Murum dam project that on our community.

Up till now, we do still not know the actual progress whether the said studies and the SEIA report as well as other related reports have been completed and ready for public scrutinizing.

We would like to state here that, before the approval made to the said SEIA report, we urge the government especially the authority concerned, the Natural Resources and Environment Board (NREB) to provide an opportunity to the public at large to scrutinize the SEIA report. And most importantly, our opinions and feedbacks on the said SEIA report should be seriously taken into account.

As our community is directly affected by this dam project, we should be duly informed regarding the progress of the said studies especially the effects and impacts of the project on us.

The government should also brief and clarifying to us regarding the specific development plans that is related with the resettlement programme as well as our livelihood and future.

We are totally discomfited with the construction works of Murum dam project that have been going on intensively at the project site while the said SEIA report is not confirmed of getting approval from the relevant authority concerned. What will happen if such report is not approve and what will the government do to recover back those land, forest, river and natural resources that had been destroyed?

In addition to the said SEIA report, we also call upon the government to inform us regarding the plan for resettlement area for us. Likewise, as being advised by the government, we have forwarded our suggestion for the proposed resettlement area that at Metalon River in the upper course of Pelieran River. However at present, Shin Yang Company is on the verge of clearing the proposed resettlement area for the purpose of large scale oil palm plantation. Shin Yang has entered the area illegally without our consent. If Shin Yang is allowed to extensively clear and fell the forest in the area there will be no more forest left for our community to sustain our livelihood. Thus, it would be meaningless for us to be resettled in the proposed area if it is to be developed with oil palm plantation.

We call upon the government with high hope to be involved in developing development plans for our betterment which will determine the future direction of our community. With that, as a start we urge the Sarawak state government and the Natural Resources and Environment Board to furnish us with a copy of the SEIA report to be scrutinized prior to it approval.