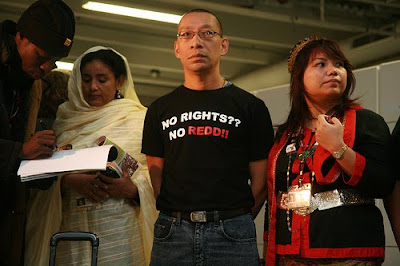 On August 6, Reuters released a news article titled “Australia firm signs forest CO2 deal with Malaysia tribes”. On behalf of Jaringan Orang Asal SeMalaysia / Indigenous Peoples Network of Malaysia (JOAS), we would like to state that our network is not involved in this and, to the best of our knowledge, we do not know which of the 24 villages (according to the news report)or 9 community leaders (according to the Australian company’s own press release) are involved in that project.

We feel it is important to make clear that it is not our network that is involved in this deal as we strongly and consistently endorse a process of free, prior informed consent (FPIC) before signing any deal that involves our forests and territories. This should involve a mandatory process where the communities are fully informed and independent workshops should be conducted to allow the communities to freely make a decision on their communal forest.

JOAS does not support the implementation of REDD in any form unless the parties involved in this deal have adequate consultation and FPIC. In this case, we hope that the company has at least ensured that the communities have access to their own lawyers who can independently advise them on the legal matters involved.

Jaringan Orang Asal SeMalaysia (JOAS) has conducted information sessions on REDD+
among its members. From these sessions there are two clear points:

1. That REDD+ will involve and affect the lands and resources of indigenous peoples

2. That there is a need for more capacity building among indigenous peoples in
Malaysia to understand REDD+

Therefore JOAS is committed towards building capacity to understand REDD and the impact,whether positive or negative, to our rights and resources.