KUALA LUMPUR (Aug 23, 2010): For the first time since its inception in 1999, the Human Rights Commission of Malaysia (Suhakam), will be conducting a national inquiry into the rights of indigenous people.

"Such inquiry involves lot of research in terms of preparing the background," said Lasimbang, who has been involved in advocacy for indigenous rights since the 80s. 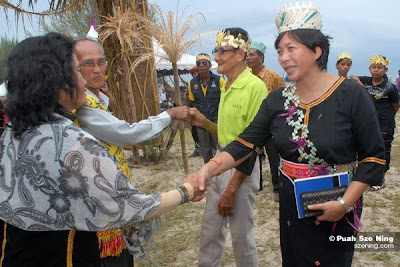 
Although the specific topics for the inquiry have yet to be identified, a broad spectrum of issues including land, education and economic activities will be looked at.

Lasimbang was speaking at a press conference after the Suhakam commissioners had their first official meeting with a number of human and consumer rights NGOs. The meeting was to discuss economic, social and cultural rights in Malaysia.

Commissioner James Nayagam, who was also present, said the inquiry was to gather hard data on the issues of concern.

"It will involve experts conducting research to provide a fair presentation of facts, not assumptions.

"A lot things are alleged to have happened," said Nayagam, referring to various complaints about land rights and abuses of women within the Penan community. "The inquiry will help us gather the data to confirm it."

Lasimbang said another important function of the inquiry was to create greater public awareness and raise issues that people may previously have not been aware of.

"Especially those in relation to violations which are not obvious to the public and which may not have been brought up before," she said.

Aside from indigenous rights issues, a variety of topics were discussed during the meeting.

A key recommendation was to put pressure on the Malaysian government to ratify the International Covenant on Economic, Social and Cultural Rights, a multilateral treaty which commits parties to work towards the granting of economic, social and cultural rights to individuals.
Posted by Eleanor Goroh