ZURICH, SWITZERLAND. Following the disclosure of the Malaysian IOI group's irresponsible dealing with native land rights and its involvement in illegal and fraudulent rainforest clearances on Borneo, Switzerland's largest supermarket chain, Migros, has announced it will lodge a formal complaint against IOI, its principal palm oil supplier.

In a statement sent to the Bruno Manser Fund, Migros said it would submit a request for IOI's misconduct to be probed by the Roundtable on Sustainable Palm Oil (RSPO). "This matter must be investigated. If the reproaches are seen to be true then, in Migros' opinion, sanctions must be imposed on the company in fault." Migros also announced that it would contact IOI directly and request for a full explanation. "If the explanation given is not satifactory, Migros will take the necessary action and draw the appropriate consequences."

Robert Keller, head of food production of Migros industries and a former executive board member of the Roundtable on Sustainable Palm Oil (RSPO), said he was dismayed by IOI's breaches of law and sustainability standards as reported by the Bruno Manser Fund and Friends of the Earth International. IOI's conduct in the Malaysian state of Sarawak and the Indonesian province of West Kalimantan had been found to be strongly inconsistent with the group's claims of corporate responsibility.

While Migros said it did not support calls for a boyott of palm oil, the supermarket announced it would examine "all the possibilities for replacing palm oil if this brings advantages in social, ecological, or health terms." The Bruno Manser Fund had called on Migros to discontinue its business relationship with IOI and to strongly reduce its palm oil consumption.

Migros is a founder member of the Roundtable on Sustainable Palm Oil (RSPO). RSPO has recently drawn a lot of criticism for its failure to effectively contribute to reduce tropical rainforest clearance in South-East Asia. 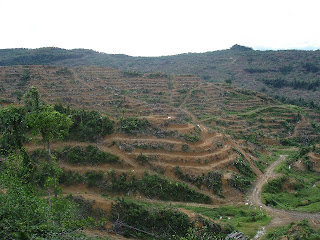 Picture: IOI jungle clearance for a new oil palm plantation on lands of the Kayan community of Long Teran Kanan in the Tinjar river region of Sarawak, Malaysia (November 2009). In March 2010, a Malaysian court declared the land leases used by IOI as "null and void" as they had been issued in an illegal and unconstitutional way.
Posted by Eleanor Goroh